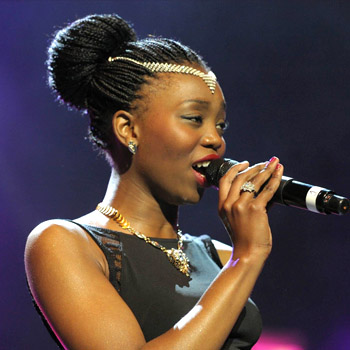 Adelia was born in a small township called Delft and started singing before she could talk. Her musical journey started as a 3 year old in Elsies River where
she used to entertain her family and friends singing ‘old school jams’. She became one of the youngest members of the church choir participating in every school concert, church play and community activities. Adelia wanted to share her love and passion for singing and music with the world.

At the age of 16 she was introduced to a programme started by Cape Outdoors Adventure, Sport and Training (COAST) and the Department of Social Development in her community, called THE DELFT BIG BAND which was under the musical direction of the legendary Ian Smith, trumpeter, singer, and music educator. This was when her dreams became a reality. Ever since then she has travelled the world with the band, visiting Sweden on two occasions to perform for Queen Sylvia of Sweden at the World’s Children’s Prize for the rights of a child after which Adelia made her debut at the Cape Town International Jazz Festival in the 2010, as one of the youngest vocalists to perform, in the process winning a scholarship to the Berklee College of Music in Boston, USA to attend their summer programme.

Upon her return from the US she went on a tour with the DELFT BIG BAND to France, performing on world renowned stages. Back in South Africa while
at college she landed the lead role of EVITA in her college production of EVITA, graduating with Merit in Performing Arts.
Adelia, as the songstress of the Delft Big Band, is a regular at corporate gigs and large scale events where she has performed in front of huge crowds and
honed her skills as a professional vocalist. In addition to performing with the very busy Delft Big Band, she performs with the likes of Ian Smith and Andrew Ford
and other jazz legends, as part of smaller quartets and trios on the jazz scene. She recently recorded a song with DJ/producer, DJ Nibblez. Recently she has
been a solo vocalist at large scale concerts such as at Nederburg Picnic Pops, the Oude Libertas Ampitheatre and the City of Lights Festival. She had the honour of
serenading Ahmad Kathrada for the “Freedom for the City” ceremony. She has held her own solo shows at the famous Crypt Jazz Restaurant and the Winchester
Mansion’s Jazz Brunch.