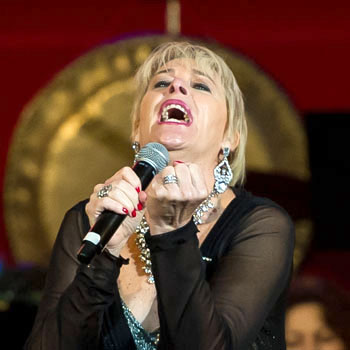 Kim Kallie recorded her first song at the age of eight, when she performed ‘Montreal’ with her mother Judy Page.

After matriculating, Kim was a frontline singer for numerous bands in the rock, jazz and contemporary genres under the leadership of Johan Laas, now musical director of Idols South Africa, and Pete Smith. In the 1980s, she moved into musical theatre, playing The Mistress in Evita and the Narrator in Joseph and the Amazing Technicolour Dreamcoat.

In 1984, Kim recorded as ‘Margino’ for the first time. Her album achieved platinum status and she had sell-out performances across South Africa. She also appeared on TV, hosting her own show A Portrait of Kim Kallie and co-presenting Harry’s House, an educational children’s programme, with Nick Taylor.

She’s also appeared in a number of cabarets with her mother, including From Taubie with Love (directed by Taubie Kushlick), Circle of Love and  Mom & Me.

After 10 years in the United Kingdom, Kim returned to the South African stage in 2007, performing in Menopause The Musical for Pieter Toerien. She now runs a Performance Academy from her studio, and continues to perform on stage at events around Cape Town. She also co-wrote the popular song ‘I need more time’ with electro-swing and dance group GoodLuck in 2014.